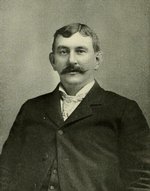 Congressman Henry Clay Loudenslager was born in Mauricetown, New Jersey on May 22, 1852. He moved with his parents to Paulsboro, New Jersey in 1856, where he attended the common schools. He engaged in the produce commission business in Philadelphia from 1872–1882, and was county clerk of Gloucester County, New Jersey from 1882-1892.

Loudenslager was elected as a Republican to the Fifty-third and to the nine succeeding Congresses and served from March 4, 1893, until his death in Paulsboro on August 12, 1911. He was chairman of the Committee on Pensions (Fifty-fourth through Sixty-first Congresses). He was interred in Eglington Cemetery in Clarksboro.